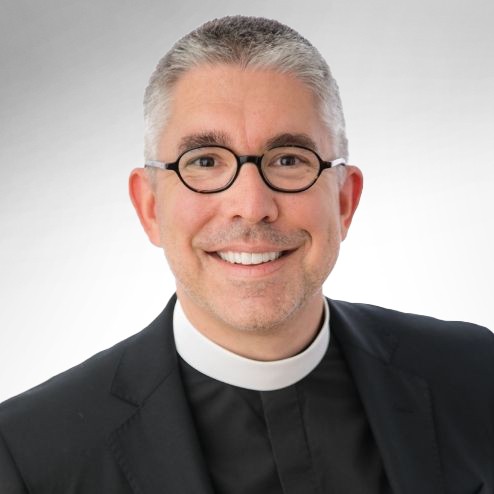 Fr. Olver has been granted a research sabbatical from Nashotah House for the 2022-23 academic year.

The Department of Theology and Religion at Durham University has named him its Alan Richardson Fellow for 2022-23, and he will be in residence there for part of its Easter term. The Richardson Fellowship is endowed “to promote research into the exposition and defence of Christian doctrine within the context of contemporary thought and its challenges” and is awarded annually. Fr. Olver will be a member of the Society of Fellows of Durham University and be proposed to Senate as an Honorary Fellow of the Department of Theology and Religion for the duration of his residence. While at Durham, he will give a public research-level presentation within the university on his research, which is on the origin of the Roman Canon Missae and its use of Scripture.

He also is the co-recipient with Nathan G. Jennings (J. Milton Richardson Professor of Liturgics and Anglican Studies and Director of Community Worship, Seminary of the Southwest) of a 2022-23 William S. Conant Grant from the Episcopal Church, which awards grants to professors at Episcopal seminaries. Their project is an introduction to the English and American Books of Common Prayer for students.

Get to Know Fr. Olver

Fr. Olver joined Nashotah House in 2014 and teaches courses in the history of Christian worship, practical liturgics, early Christian liturgy, ecclesiology and ecumenism, and pastoral theology. His research interests include sacramental theology, early liturgical development, the origin of the Roman Canon, and the development of Anglican liturgy. He has presented lectures and papers in the United States and around the world, published articles in numerous peer-reviewed journals and edited volumes, authored a number of the entries on liturgy in the fourth edition of The Oxford Dictionary of the Christian Church (ed. Andrew Louth), and is a regular contributor to the Covenant blog of The Living Church.

Fr. Olver serves the church at both diocesan and local levels. In 2005, he was ordained in the Episcopal Diocese of Dallas, which launched eight years of full-time pastoral ministry: first at St. John’s Episcopal Church and School (2005-06) and then as the assistant rector at Church of the Incarnation, Dallas (2006-2013). There, he oversaw adult formation as well as the parish’s renowned music and liturgy program, and also served the diocese as the Ecumenical Officer (2005-2010) and on the Executive Council (2008-2011). From 2006 to 2015, he was a member of the Anglican-Roman Catholic Consultation in the U.S. (ARCUSA), the official dialogue between the Episcopal Church and the United States Conference of Catholic Bishops, and from 2018-2021, he was a member the Task Force on Liturgical and Prayer Book Revision for the Episcopal Church and was a delegate at the 2022 General Convention in Baltimore.

Fr. Olver was raised in the Brethren in Christ tradition in southern Pennsylvania and sensed a call to a vocation in Christian ministry at a young age. A trained musician, he was introduced to Anglicanism as an undergraduate. Fr. Olver’s hobbies include running, rock climbing with his son, novels and films, and backyard chickens. He was married to Kristen in 2001, and they have two children. He is an assistant priest at Zion Episcopal Church in Oconomowoc, Wisconsin, where he attends with his family.